In the Tin Business

Pretty typical, for Eagle, and for many rural communities everywhere in the world, I imagine.  We burn our trash.  Not only paper and food scraps, but aluminum and steel cans, glass, old clothes, rubber boots, plastics, you name it.  If it’s been raining, used motor oil works wonders to get the fire going in a 55-gallon drum.  It’s a great way to get rid of smelly garbage that might attract bears or other animals; plus, you can dump out the contents of your burn barrel for free at the Eagle Village landfill.  On the other hand, taking unburned garbage to the landfill costs you ten cents a pound.  They have limited space, and burned trash takes up so much less room.

During my first couple of weeks on the job here at Yukon-Charley Rivers National Preserve, I spent quite a few hours feeding the burn barrel.  My old pals from earlier periods in my life will probably be shocked to learn that, yes, I burned it all.  Even plastic.  I tried my best to stand upwind.  That’s how it’s done here.  There is no recycling program.

Why not, in this day and age?  Isn’t recycling fairly well accepted as the right thing to do?  (And what’s wrong with those backward, rural people, anyway?!)  Sure, recycling makes sense if you live in an urban area, close to transportation and industry.  But out here, not so much.  We are 370 miles from Fairbanks, the closest recycling drop-off site.  And even if you can haul your recycling to Fairbanks, once you deposit it into the recycling center containers, what happens to it then?  I suspect most of those materials will have to travel all the way to the lower 48 before they can be processed into something new.  When you figure out the freight shipping costs, and the fuel burned to move the extra weight, recycling begins to make a little less sense.

Nonetheless, I got tired of standing by the burn barrel, and decided early on to try setting up a recycling program for the preserve.  My co-workers cooperated, and stopped putting garbage in the burn barrels.  The preserve began paying ten cents a pound to get rid of our non-recyclable trash.  This season we recycled 54 pounds of glass, 17 of aluminum, 18 of steel cans, 13 of plastics #1 and #2.  And we paid to dispose of 727 pounds of trash in the landfill.

The transportation hoops we all had to jump through to get the recyclables to Fairbanks were impressive, sometimes ridiculous.  The most elaborate scheme was this:  park rangers brought old food from the public use cabins to Eagle, carrying it 100 miles upriver by boat.  I emptied out the cans and packages, rinsed, flattened and sorted the containers, and dumped the food in the river.  Then I sent the clean recyclables back downriver 100 miles by boat.  They were unloaded from the boat, hauled three miles by utility vehicle to the Coal Creek airstrip, put on a park plane and flown to Fairbanks, where a National Park Service staff person met the plane and drove the stuff to the recycling drop-off site.

Burning it is so much easier!

There is no doubt in my mind after this summer that in the “Reduce, Reuse, Recycle” mantra, the first two parts are so much more important than the third.  Recycling should be the last resort, a kind of necessary evil performed only after we’ve done everything else we can to reduce and reuse first.  Deliberately purchasing only what you truly need, buying in bulk, and considering your packaging choices goes a long way toward keeping that garbage out of the community in the first place.  And there is a historic and cultural precedent for the “reuse” model, especially in bush communities like Eagle.

As I’ve been cleaning out closets, barns, cabins, and garages all summer and have wondered out loud why my predecessors have held onto all this miscellaneous junk for decades, I’ve heard the expression “bush mentality” many times as the explanation.  It takes monumental effort and expense to get stuff all the way out here; once it’s here, it’s valuable no matter what it is.  Especially if there’s some chance that it could be re-purposed in a useful way.  Not that long ago, cargo arrived here only by dogsled, steam boat, and mule.  And a lot of that cargo is still here, being re-worked into new projects.

Wander around town, or visit remote cabins in the area, and you’ll see roofs covered in some sort of tiles; they aren’t shingles exactly, nor are they corrugated sheet metal.  They come in shades of grey, tawny, bronze, brick, russet, rust.  Quite beautiful, especially if the sun is shining on them after a brief rain shower, they give Eagle a unique look – and illustrate the bush mentality/reuse practice.

Early in the 1900s, tinplate wasn’t available in Interior Alaska, but white gas, also known as Blazo, was hauled here in five-gallon tin cans.  Cut with tin snips and flattened out, the Blazo cans made excellent roofing material.  In the Mule Barn museum at Fort Egbert, there’s a photograph of a woman named Mae Collins, labeled, “In the Tin Business, Eagle City, 1912.”  Mae looks happy to be there, working with her tin snips.  The concept of community recycling was still many decades into the future.  But being thrifty, using every scrap of what you had, and not letting anything go to waste, made a lot of sense.  It still does.

I bet even Mae Collins burned her trash, though. 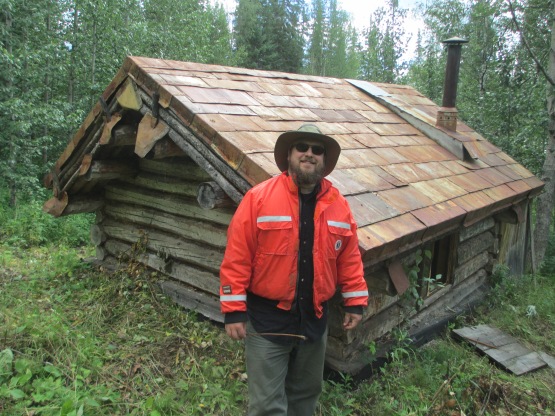 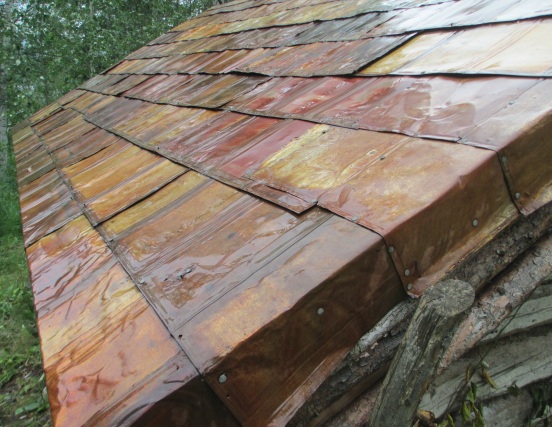 The colors in the Nation Cabin’s Blazo Can roof could almost fool you into thinking it’s copper.

Eagle house, with Blazo Can roof (and contemporary plastic equivalent of the Blazo Can nearby.)

1 Response to In the Tin Business