A single drumbeat, loud as a cannon shot, shakes the room. Everyone jumps, and a framed picture falls off a shelf. “We’re here!” somebody says, and we all laugh. With that powerful opening beat, and amidst the echo of laughter, they start again, and begin drumming, singing, and dancing: nine women and four men, dressed in Unangan (Aleut) finery. Three of the women, the younger generation, wear seal skin dresses, pieced so the different colors of fur are in a block pattern showing tan, dark brown, and black. Beaded head-dresses cover their hair. The men wear colorful bentwood hunting visors and carry carved wooden kayak paddles. Gold embroidery decorates the high stand-up collars on their off-white shirts, with additional adornments made of fur and bone. Two big frame drums keep the beat, and the women rub together seal scapula scrapers to add another percussive layer to the rhythm.

They share a Memory Song, a Harvest Song, a Song for Walking, and a Song About Unangan Values. Ugunuǧnaaǧnaagnaǧulux, ataqakun, an’gixtalix. It’s impossible not to tap your foot to the beat.

“Commemorating is not performing. It’s about keeping our story alive,” says Aqualina Lestenkof. “Today, when we walk down to East Landing, we are re-enacting the story.”

On Sunday, June 14, 1942 – seventy-five years ago today – the U.S. Army Transport vessel Delarof arrived at St. Paul Island in Alaska’s Pribilof Island archipelago. Interrupting an island baseball game, the authorities told the people: “You are being evacuated. You have one hour. You may bring one suitcase. Then you’ll board the ship at East Landing. Better get packing.”

The United States had been at war with Germany and Japan for just over six months. In early June 1942, Japan had attacked the Aleutian Islands, bombing the American military bases at Dutch Harbor, and invading Kiska and Attu. Forty-two residents of the village on Attu had been taken as prisoners of war, and transported to captivity in Japan. It is not a stretch of the imagination to say that the safety of other Aleutian and Pribilof Islanders was at risk. And so, the four hundred and seventy-seven St. Paul islanders packed their bags, their cardboard boxes, their flour sacks, and walked down to the ship.

“People didn’t have suitcases; they didn’t go anywhere,” says Aqualina, at today’s commemorative ceremony of the 75th Anniversary of the Evacuation. “Imagine that: taking one bag and carrying it down to East Landing. Getting on the Delarof, looking back, maybe for the last time, leaving this place that you love.” She has to pause for a moment. Tears spring to everyone’s eyes. “How do we grasp that story? It’s so big.”

The people boarded the Delarof, destination unknown. They spent eight days at sea, then landed at Admiralty Island on Funter Bay in Southeast Alaska, where they moved into an abandoned cannery. The U.S. Fish and Wildlife Service was in charge of the camp, and the St. Paul islanders were wards of the state. It may as well have been a different planet: giant trees, a rainforest environment with salmon, bears, and Sitka black-tailed deer. Unfamiliar surroundings, weather, plants, and animals.

Greg, who was a child during the evacuation, tells us what it was like: there was no fresh water supply. No cooking facilities. No beds, or partitions for privacy. No sanitation – people collected any kind of cans or containers they could find to use as honeybuckets. But soon their ingenuity took over and they built an outhouse over the tide zone so when the high tide came in it could take away the waste. They put together pipes for water, hung blankets for privacy, made beds out of chicken wire. “They built things, helped themselves.” The pride is evident in his voice. Greg quotes his mother-in-law, Mary Bourdukofsky, “Don’t forget who you are. Come together and work together.”

The St. Paul Islanders were interned at Funter Bay for two years. One out of ten died there, of measles, tuberculosis, flu, exposure, malnutrition. And yet, the fur seal harvest, a U.S. Government for-profit venture, continued even during war time. “They came and took the men back to the island to harvest seals in 1943, despite the dangers of Japanese attack, and left the women in the camp. If anything had happened to the men…” He shakes his head. “Let’s not let it happen again,” says Greg, quoting Mary B.

Jason, also a child during the evacuation, recounts a different part of the story. “The Tlingits [Native Alaskans] of Southeast Alaska brought fish to the Aleuts. Taught them how to fish and hunt in that area. Taught the St. Paul Islanders that we have freedoms that we didn’t know about. Even today, the Juneau dancers sing an Aleut song …about the birds flying… the Aleuts gave the song to them, gave them permission to use it.”

Aqualina tells us that those lessons about freedom came back to St. Paul Island when the islanders returned home. “Not only was it about the hardships, but when they returned they were a force to be reckoned with. They worked for four or five decades to gain the freedom that we have now.” Mary Bourdukofsky’s name comes up again and again. The island matriarch, her tireless work inspired many. “Might as well make use of myself,” she once told Aqualina. Carrying on the tradition, two younger women have taken over the planning of the annual commemoration event. “They are like this,” says Aqualina, interlocking her fingers in two loops, like links in a chain. The links go back in time, connecting us to the past, taking us into the future.

After the commemoration, we all walk together down to East Landing, carried by the drumbeats from Barbara and Aqualina’s big frame drums. Father John from the Russian Orthodox church gives a blessing at the commemorative plaque. Some of the people walk to the landing and place flowers in the water. There is grief and an honoring of the dead, as well as an acknowledgment of the strength of the survivors. Even under the weight of history and through the tears, there is a sense of pride. Music, laughter, playfulness, and lots of hugs balance (and even overwhelm) any lingering sadness.

At the end of the ceremony someone shouts, “Play ball!” In memory of that long-ago interrupted baseball game, the islanders go back to the playing field and pick up where their ancestors left off, all those years ago.

“What happened to us shouldn’t have happened to anybody. Maybe it helps to remind people. Americans need to stand up for each other.” — Mary Bourdukofsky, from a February 28, 2006 interview with the Seattle Times.

Walking (and riding) down to East Landing together.

Aqualina, with her drum and her “one packed bag.” 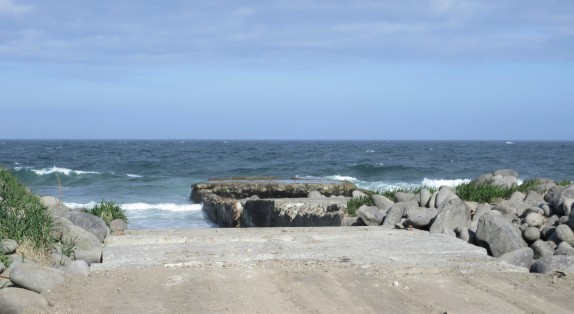 The people who died at Funter Bay are still buried there. This plaque, located near East Landing, serves not only as a historical marker, but also as a memorial.

Mary Bourdukofsky, who later became a leader and matriarch figure in the community, was a young mother and only eighteen years old when the evacuation occurred.

Interpretive sign showing the routes of the Aleutian evacuations. St. Paul Islanders were not the only people to go through this experience. Note the arrows showing Attuans’ journey to Japan as POWs. (Source unknown.)

This entry was posted in Alaska, Culture, History, Islands, Uncategorized. Bookmark the permalink.