I’ve learned a lot about the U.S. Postal Service (USPS) this week. Maybe not as much as Cassandra, who started working at the Seldovia Post Office a few days ago, but let’s just say I have contributed to the complexity of her training.

First load to the post office.  What mistake did I make? (See bottom of page for answer.)

First, let me correct something I said in my other report on this topic, Weight. There actually is a weight limit on those USPS Priority Flat Rate boxes:  70 pounds.  How in the world anyone could fit seventy pounds into a 12″ x 12″ x 6″ box is beyond me.  The heaviest I’ve managed so far is 26 pounds.  You’d have to be shipping lead or gold to make it weigh seventy.  (I will keep this in mind after a summer spent panning the Yukon River for gold.)

TIP:  When you use a Flat Rate box, remember that other peoples’ 70-pound boxes of lead and gold may come crashing off the end of the conveyor belt onto your own fragile box of homemade canned salmon or precious rare books.  Pack accordingly with bubble wrap and so on.

For shipping within Alaska, those Priority Flat Rate boxes don’t make a whole lot of sense.  As in most things, there’s a unique way to do it in our unique state.  USPS has a special rate called Limited Overland Rate or LOR, for shipping stuff from one off-the-road-system place to another off-the-road-system place within Alaska.  So far I have shipped two big boxes of groceries and camping gear to myself, weighing a total of 49 pounds, for $27 bucks.  That’s .55 cents a pound.  The large Flat Rate box costs $18.75, and if I can only cram 26 pounds into it, that works out to .72 cents a pound.  Plus, even though they are worth their weight in gold, you can’t fit a tent, a kayak, skis, or a sleeping bag into a Flat Rate box.

Media Mail is another nifty USPS rate.  Only bound books, printed music, films, CDs and DVDs are allowed.  This is for the old-school dinosaur types like me, who still like to read real books and play real instruments while reading sheet music.  The USPS can and will open your box to inspect it for jars of salmon or chocolate bars, so don’t try to sneak anything like that into a Media Mail box.  The two boxes of books I’ve sent myself worked out to .67 cents a pound.  Since books weigh less than gold or lead, this is still cheaper than Priority Flat Rate.  And it’s much cheaper than buying new books or, might I add, a Kindle.

Borrowed a bathroom scale from Suzie.  Great for weighing boxes. 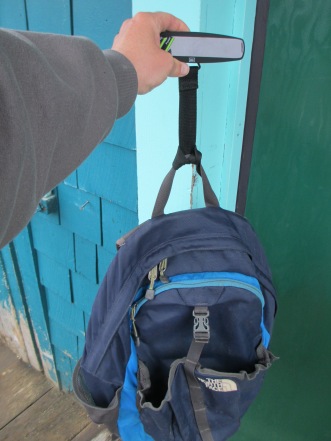 Borrowed handheld scale from Kate.  Great for weighing packs and luggage. Special advantage: you don’t have to weigh yourself.  I might need to get one of these!

The post office won’t let you mail beer, wine, liquor, strike-anywhere matches, butane lighters, camp stove fuel, bear spray, or flares…  I guess I will just have to do without these necessities this summer.  Or meet some locals who can supply me!

What mistake did I make?  I used a Dry Pear Hard Cider box.  The USPS doesn’t allow a box to contain any alcohol, so you can’t show alcohol labels on the outside either.  I still got to use the box, but we had to cover up anything that said “alcohol” on the outside.