No matter how many families you have, there is always room in your heart for more.  I got adopted last week, even though I’m not an orphan by any stretch of the imagination.  The Peregrine Falcon survey crew came to town last Friday, and swept me along with them for a three-day trip on the Yukon River.

The plan was conceived over morning coffee at park headquarters.  Sarah and Patrick, veteran Peregrine crew members, fell in love with me like I was a puppy at the animal shelter.  I whimpered and made big puppy eyes at them.  Captain Jack, the boat operator, said there was room in the boat for me.  When he asked Melanie, the Peregrine crew project leader, if I could come along, she said yes instantly.  All she knew about me was my name.  But there was no hesitation.  The deal was sealed with a hug, and just like that I was part of the family.

The Yukon-Charley Peregrine Falcon study started in 1973, and other than a few skipped years, has been on-going for four decades.  Like many other long-term ecological studies, such as Rolf Petersen’s Isle Royale Wolf-Moose Study or George Divoky’s Cooper Island Black Guillemots, a dedicated lead biologist will devote his or her career (and personal life) to a project.  Melanie Flamme is one of those biologists.  She works with local teens in Fairbanks, recognizes the brightest kids, and then gently nurtures them until they’re talented, experienced field biologists themselves.  I remarked once or twice how well everyone on the crew got along, how smoothly they all work together, and she said, “That’s easy.  You just surround yourself with extraordinary people.”

The Peregrine survey works like this:  Captain Jack pilots the Glory Wigeon up and down the Yukon River.  Waypoints are marked on a GPS unit, showing locations of previously observed Peregrine Falcon nests.  We pull in, Jack approaches the bank from downstream (aiming the boat into the current), and grounds the boat onto shore as gently as he can. Mel opens the front windshield and climbs out, bow line and a sledgehammer in hand.  She finds a likely spot upriver of the boat, pounds in the stake at the end of the line, and Jack shuts off the Glory Wigeon’s motor.  We all pile out, passing spotting scopes and Crazy Creek chairs bucket-brigade style, and set up on the bank of the river opposite a likely-looking bluff.  We then scope the bluff, looking for eyries (pronounced “eye-ree”):  ledges, caves, or tangles of tree roots.  Chicks can’t thermoregulate for the first two weeks after hatching, and must be brooded by a parent or protected by shade.  Heat is harder for them to tolerate than cold.  So, on a hot day, they might be tucked away where we can’t see them.

Our first stop was Eagle Bluff, still within view of town.  I settled into my Crazy Creek chair, set up my scope, and oriented myself to the cliff face.  I heaved a big sigh of relief.  “Just like old times,” I said, thinking of all the hours I spent in 2014, watching murres on the cliffs at St. Lazaria Island.  “Oh, you’ve done this before?” asked Mel.  Up to that point she didn’t know I had any experience doing bird-related field work.  “Yup, this was meant to be,” I said, and pointed at the Peregrine Falcon on my hat.  “I think you’re right, baby girl,” said Mel.

I was a bit startled by the “baby girl,” but soon realized that Melanie calls everyone “baby boy” or “baby girl.”  And everyone calls her Mama Mel, or Mama Bear.  Indeed, although we are almost the same age, I felt like one of her kids on the crew, cherished and encouraged to do my best.

At least an hour is spent at each location.  We sit and listen for Peregrine Falcon vocalizations, the babies crying for food, or adults screaming something that sounds like “Bitch! Bitch! Bitch!” each word ascending in a nasal shriek, almost becoming two syllables each.  “E-chup” is a courtship call, and you might also hear a harsh “kek-kek-kek-kek.”  Those bluffs are pretty far away, so any verbal clues from the birds are helpful.  The slatey blue or grey backs of perched adults blend in remarkably well.  Your best bet is if you can spot the white breast or bright yellow feet of the adult (if it’s facing you), or the fluffy white down of a chick.  But the chicks will lie there in the eyrie like doormats, or in a piggy pile, napping and waiting for Mom or Dad to bring the next meal.  Peregrine yoga, wing-stretches, feeding times, any movement at all, helps us to find the eyrie.

A male falcon is called a tiercel, because the males are one third smaller than the females.  The female is a “hulking beast” much bigger than her mate, her back is more grey than blue, and she has a streakier breast.  Males have a whiter breast, look like they’re wearing white “gauchos” on their legs, are more fusiform or tear-drop shaped than females, and more blue than grey.  My Sibley’s field guide just shows one picture of an adult Peregrine Falcon, which proves that you need actual study in the field to learn the subtleties of wildlife observation.

I haven’t read any of the Peregrine Falcon reports, so I don’t know the details or the ultimate goals of the study, but I would guess that they are looking at total population, population changes over time, nesting dates, brood size, chick ages, and fledgling success.  The researchers fill out a nest card at each location, and also estimate chick ages.  A series of chick age progression photos help them age the brood:  the youngest are small white downy fluff-balls.  As they get older, their faces darken, and an “X-back” mark develops.  These visual differences can help observers to age the chicks accurately to within a few days.  The youngest chicks we saw were about 15 days old; the oldest were fledglings at about 40 days.  Hatching times are staggered, with an average of three days between each egg.  This means there can be quite an age spread within one brood, with a potential ten days or more between the oldest chick and the youngest.  I would not say that baby Peregrine Falcons are cute.  More like down-covered velociraptors.

Peregrine Falcons primarily eat birds, but will also eat ground squirrels and other small mammals.  They hunt by flying high, then “stooping” in a 200-mile-per-hour dive, hitting the bird from above.  The prey’s back or neck is broken, and it is knocked out of the sky.  Probably never even know what hit it.  Eyries are located on high bluffs that have a good view in both directions up and down the river, all the better to keep watch on tasty ducks.

The river provides.  Not only ducks for falcons, but all sorts of other bits and bobs.  Driftwood of every size, bone, feathers, string, rocks, rope.  Jack, who is from Circle and grew up on the river, says he could survive in the country with just his knife.  I believe him.  He lost one of his flip flops, but soon found another.  It was just the right size.

Although I have only experienced three different biology field camps so far, it’s clear that a unique culture develops at each one.  The setting and the work leads to camp tradition, whether it’s Dutch oven cooking, dips in a favorite swimming hole, yoga or chin-ups, “cookie-30,” card games or cribbage, insiders-only jokes, or a code language for place names.  The work is hard, the hours are long, and the conditions require a high-tolerance for physical discomfort and lack of personal space.  Sharing, taking care of each other, being sensitive and aware of each other’s needs and state of mind, laughter, good food, strong coffee, simple kindness, and hugs make it easier.

This field camp’s culture is — how shall I say this?  The nearly constant banter was not G-rated.  I must say I learned a lot, and laughed until I had tears streaming down my face.  Once, Sarah had to remind me to breathe, I was laughing so hard. 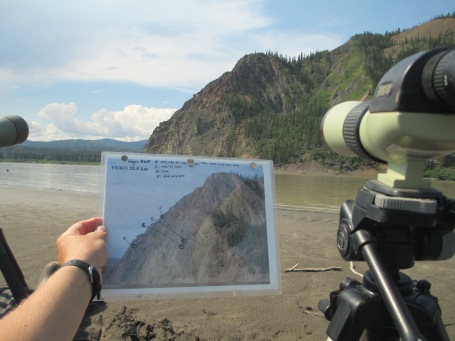 Most of the bluffs were monitored from the opposite shore, where we’d set up the spotting scopes and watch from across the river. But we floated by some locations, using motion-stabilizing binoculars to try to spy the eyries. Here Captain Jack keeps us on course from the bow.

Mel and Patrick scan the cliffs with image-stabilizing binoculars, while aboard the Glory Wigeon.

Parked on the left bank of the Yukon, looking across the river to find eyries with chicks, or adult falcons. 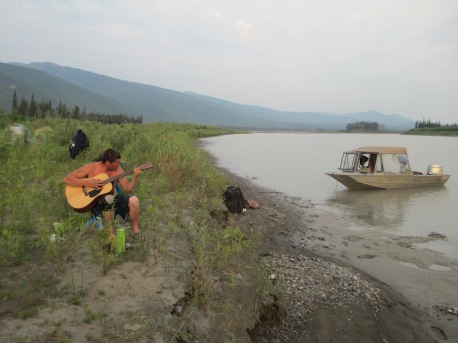 Jack plays guitar at our campsite on Stink Creek. 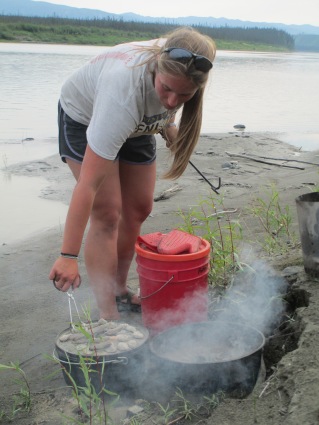 Sarah carefully arranges the coals on the Dutch oven.

This very poor-quality digi-scope photo was taken by holding my little Canon PowerShot camera up to the viewfinder of my spotting scope. There’s a Peregrine chick right in the center of the frame.  This shows how hard they can be to spot!

Each active eyrie has a nest card, to record all the observations. 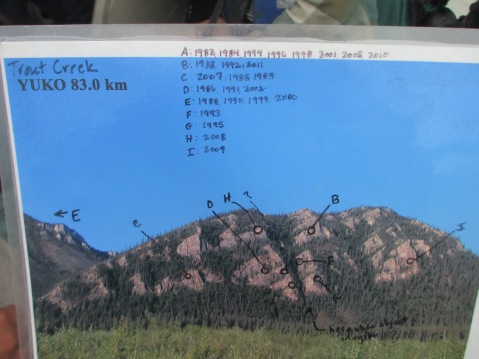 “The Dreaded Trout Creek” bluff. So many eyries! So many mosquitoes!

Bear and otter tracks. Although we didn’t have any close encounters with bears, we did see a black bear climbing around on one of the bluffs as we were driving by in the boat.

We picked enough raspberries for Jack to make a nice topping for our pancake breakfast. 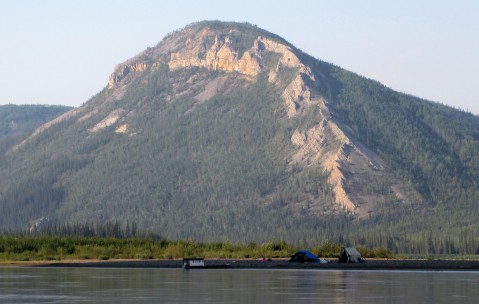 Sophie and Klaus’s fish camp. They sleep in the blue tent, and can their fish in the wall tent. 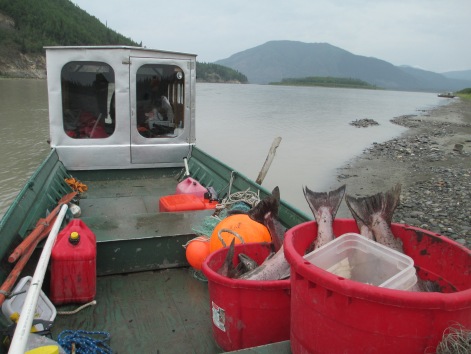 Sophie and Klaus live in Eagle, but I didn’t meet them until we were all on the river. Here are a few of their king salmon, which they caught with a set net. Their other fish had already been put up in jars. 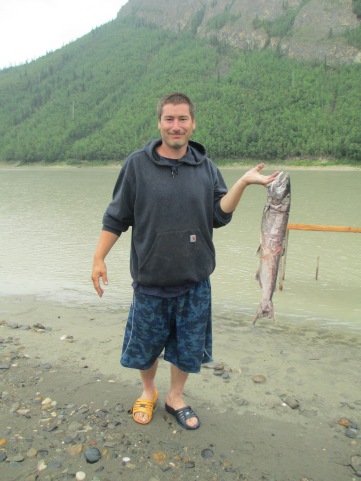 Jack sweet-talked Sophie and Klaus… “We should spend a fish on these people,” said Sophie. The river provides.

King salmon butterfly steaks, seasoned with wild chives picked from the bank of the river. 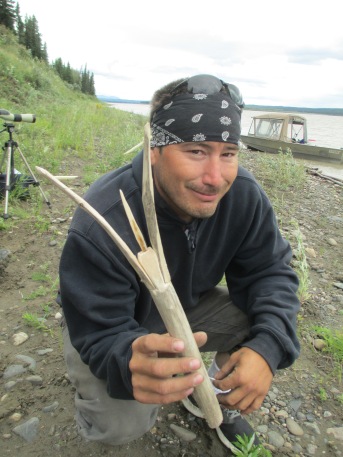 Jack built this grayling spear, using just his knife and materials from the river. The backward-curved barbs at the tip will keep a fish from sliding off the bone spear point in the center. He planned to catch a grayling in a clear-flowing tributary, and then use the head as bait for burbot in the Yukon. 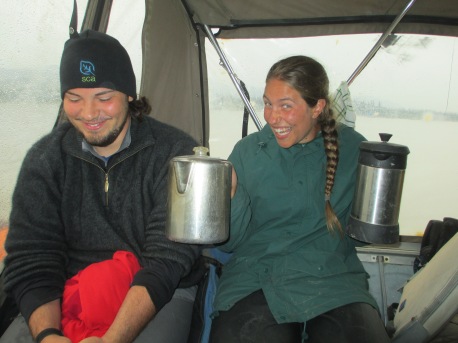 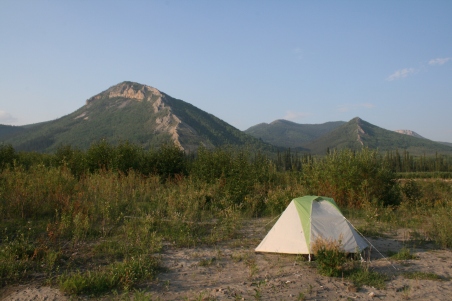 Camped near Nation Reef. Locals call this Hole-in-the-Wall, for a cave that’s up there on the ridge.

Moonrise over the Yukon. Forest fire smoke provides a mysterious cast to the distant hills.

The weather switched from hot and smoky to cool and rainy, but the dauntless field biologists carry on.

Some of the 248-million-year-old Permian period brachiopod fossils that we found near the Nation River.

I left my XtraTufs at home, thinking we’d be climbing around on cliffs to find the falcons. So I spent three days “in the gulag” with wet silty feet. Patrick and Sarah are more appropriately attired. Thankfully, it never got very cold. 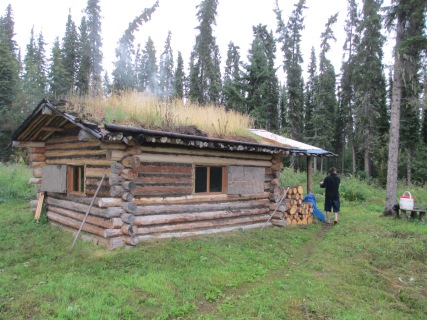 The Kandik Cabin, one of the park service’s free public use cabins within the preserve. 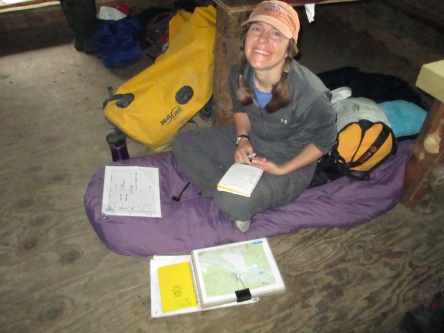 Melanie updates the field notes and data during our stay at Kandik.

The cache and public use cabin at Nation Bluff. The cabin had recently been trashed by a bear, who had broken both windows, pawed through the magazines, shredded the screen door, and shat on the floor.

Slaven’s Roadhouse was built in the 1930s, and now serves as a free public use bunkhouse for river travelers. It’s a stop on the Yukon Quest sled dog race that happens every February.

The view downriver from Slaven’s.

Sunset on the Yukon River.

Peregrine Crew family at Slaven’s Roadhouse. Patrick, Sarah, me, Melanie, and Sunny (our Youth Conservation Corps intern from Eagle, who joined us on the last day.) Jack isn’t pictured – he was off playing his guitar somewhere by a campfire.